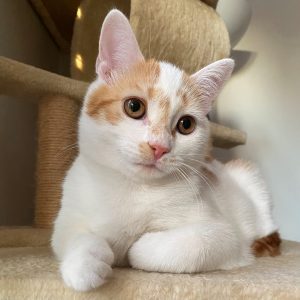 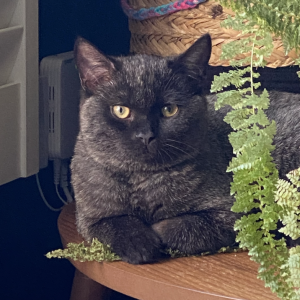 Although they look very different, Dijon and Deville are two brothers who are closely bonded and have grown together from cute tiny kitties into very handsome and unique adolescents. Dijon has a beautiful white and ginger coat, whilst Deville is a beautiful black tabby cat with subtle markings that make him look like a little black leopard,

Deville is super cuddly. He is forever asking for pets and chin rubs and is far too sweet to be refused! He is slowly coming around to being picked up and sometimes he even enjoys getting the odd belly rub.

Dijon has changed a lot since he first came to us. Initially, he was a bit hissy and would shy away from humans, but now he has become a very affectionate kitty who loves to be cuddled and purrs uncontrollably when his fosterers are nearby.  He has an extremely healthy appetite and does the cutest growl when he eats to show his brother that his food is his alone. This also happens when he catches a toy. He is also getting used to being picked up and is loving all the attention he is getting.

Dijon and Deville have not been around children yet but we think they will be fine as they have no aggression whatsoever and just love to play. They are generally relaxed with loud noises and don’t run away from the hoover. They are, however, a bit wary of new people and tend to hide away when someone new comes into their foster home.  We do not know how they get on with dogs or other cats.

Although they have grown a lot, they’re still very much kittens, running around like crazy, eating like horses, and napping in the sun.

They are quite intrigued about the outdoors, but have not yet ventured outside of their fosterers’ home.

Dijon and Deville spend most of the day together either playing, sleeping, or eating. They have extremely healthy appetites and just love meal times! Dijon is the more playful of the two, whereas Deville is much more relaxed.

They are extremely loveable kitties and are more than ready to be adopted.