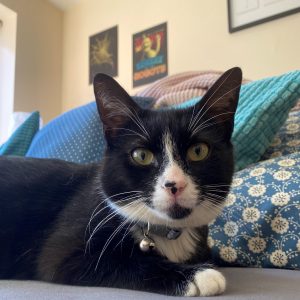 Batman was born in a garden in Crumlin, Dublin to a wildie mama (now spay and taming in our care) with his four siblings.

He  is an exuberant kitty who just loves to play. He enjoys having a large selection of toys to pick from, sometimes he even likes to play with all of them at the same time. He has a particular fondness for a tiny white mouse which he plays with happily for hours on end.

Batman just loves cuddling. In the past, he was cautious of humans and was not quite comfortable with being petted. Now, however, he can’t get enough pets and rubs! He follows his foster parents around the house and loves being in their company. He does not care about coming across as clingy as he just loves them so much! He now craves being petted and he asks to be picked up and placed on their laps for cuddles and chin scratches.

He is the sweetest cat ever! He is so affectionate and observant of his surroundings. He is very clever and understands right from wrong. He comes when he is called and when he is naughty, he knows exactly what ‘no’ means. Batman loves conversation – anything for a bit of extra attention is always welcomed by this handsome boy. He knows his name, but also loves being called ‘Baby.’ He loves it so much that he always comes bouncing along when he hears the name.

He has his own quirks. He tends not to play with new toys, preferring instead to play with his old favourites, which are typically noisy or broken. He plays with them until they are worn out completely.

He particularly enjoys wet food with gravy (not a jelly fan).

He is becoming better at dealing with noises, becoming ever more curious and confident, and even venturing out to the balcony to watch the activity out on the street. He would enjoy having access to a secured balcony so he can safely study the comings and goings of the world below.

He likes to snooze in the afternoon sun, but this isn’t laziness; he’s just trying to conserve energy so he can have his night time zoomies and run about the house freely.

Batman also made a cat friend and learned some cat tricks from his friend. So house with another cat is ideal.

Batman is ready to find his forever home and is totally prepared for adoption by a family who can provide him with a lot of love and attention. Children might be okay, but he will need some time to get used to how fun they can be. There is nothing that a little work and a lot of love can’t overcome, and Batman has so much to give. He may get along with other kittens, he is really playful, so having a playmate would be great, but it is not yet known how he will get along with doggies.